“Something Wicked ” is a single from our forthcoming third LP. It’s a Midwestern Gothic tune which looks back at the joys/terrors of an adolescence experienced in a conservative household.

Major points of influence here include Ray Bradbury, Talking Heads, and The Pixies. The whole band is present and… >> Continue reading 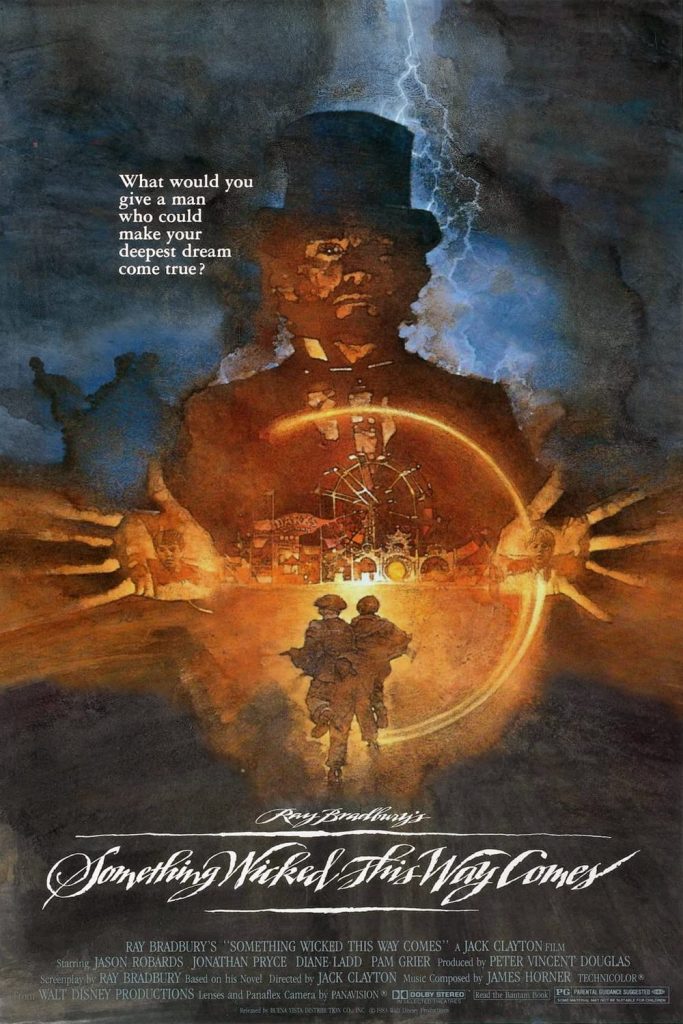 When I was a kid, I was fascinated by scary movies. I have no idea why. It might have been because of the often fantastical elements of such films; I’ve always had vivid dreams, and certain kinds of scary films have a surrealistic quality which appealed to me, even as a kid. That, and I liked that spine-tingling feeling of anticipating the dreadful unknown.

And yet, I wasn’t allowed to watch many scary movies. I had seen the movie “Poltergeist” the year it was released (1982). I was six, and I became kind of obsessed with the film, and terrified of my closet at night. My parents thus limited what scary movies I was allowed to see.

And so, in the fall of 1984 or ’85, when the Disney Channel announced an October lineup including two scary films — “The Watcher in the Woods,” and “Something Wicked This Way Comes,” I was excited. If these movies were showing on Disney, I knew I’d be allowed to watch…. >> Continue reading

We awaken! With new music! Here’s a song bound for our third LP, which we’re hoping to release in late 2021. It’s been hard to make forward progress on the album throughout 2020, for a number of reasons — many of which are obvious, some of which are not so obvious. But we’ve got 7 full-band tracks more-or-less in the can, with an 8th under construction. I’ve been writing and recording demos for all the others. And while it might have been preferable to release one of the full-band tracks at this point, this demo for “Cain and the Fireboys” is pretty sweet, and has a certain timeliness about it which justifies putting it out there ASAP. Click the link, enjoy, and be excited for our forthcoming LP. It’ll be a wild one!

With regrets and apologies, we have cancelled our July 3 gig at Hunt Club. We had been looking forward to it — but apart from concerns about the ongoing pandemic, our guitarist Eric and his wife Emily were recently involved in a serious car-accident. Both are basically okay, although their ongoing medical and personal concerns… >> Continue reading

All shows cancelled until July 3

Howdy, folks.  Like many of you, our plans for 2020 have been thrown out the window, thanks to the Coronavirus pandemic.  This post is primarily to inform you that we’ve officially cancelled all our shows until July 3.

At this point, we ARE still hoping to play our July 3 date at Hunt Club, especially given… >> Continue reading

03/27/20: Dachshund, Machine in the Mountain, Oceanaut, and Matthew W. Charles at Whittier Bar

[Update, 3/18/20: This event has been cancelled due to the Coronavirus outbreak.]

At Whittier Bar on Friday, May 27, we’ll be excited to share the bill with two of our favorite Tulsa heavy-progressive bands, Machine in the Mountain and Oceanaut! Philly folk-punk act Matthew W. Charles will open the evening. Come hang with us! >> Continue reading 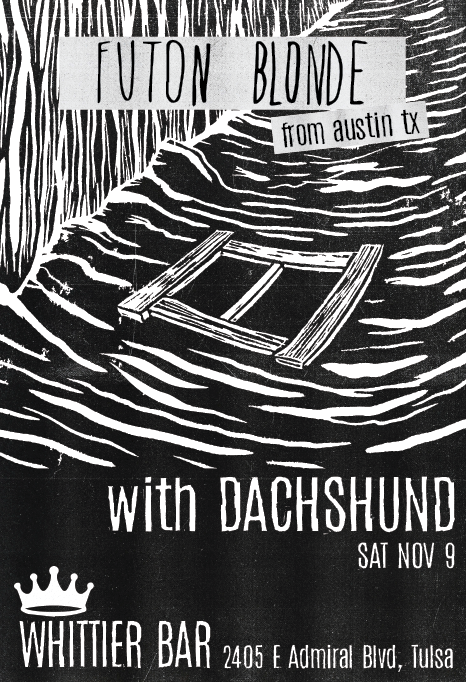 Saturday November 9: A night of adventurous indie grooves at Whittier!

Futon Blonde: With a sound which blends a rich melodic sensibility and percolating late-night grooves, Futon Blonde serves-up a brand of indie-rock which is at once sophisticated and effortless. Hailing from Austin, Tx, Futon Blonde is on tour supporting their new album “Uppercut.”
https://futonblonde.bandcamp.com/

Dachshund: Defining themselves equally by their adventurous spirit and their pop sensibility, Dachshund smuggles art-rock ideas into pop-songs. Dachshund is from Tulsa, OK, and is proud to support Futon Blonde.
https://dachshundband.com

by Mazus in News, Shows and Events

Get a-long little doggy! Giddyup to Whittier Bar on Friday, Aug 23, for some progressive T-Town rock and some gothic Americana!